To What Degree Are Median-joining Networks Phylogenetic?


In a comment to the recent paper by Forster et al. (2020), Sánchez-Pacheco et al. (2020) argue that Forster et al.'s analysis is "neither phylogenetic nor evolutionary" because it's based on the use of a Median-joining network. They don't re-analyse the data, but instead mostly refer to a paper they published four years ago in Cladistics (Kong et al. 2016), the journal of the Willi-Hennig Society.

In that earlier paper, Kong et al. conclude:
Other than fast computation and very attractive graphics, MJNs [Median-joining networks] harbour no virtue for phylogenetic inference. MJNs are distance-based, unrooted branching diagrams with cycles that say nothing about the evolutionary history due to the absence of direction. MJ was introduced in 1999 and, in contrast to most scientific ideas, its application has spread rapidly through copying the methods of others, and, unfortunately, with little further scrutiny. We hope that the theoretical arguments presented here can reverse this trend.It seems unlikely that it will, as I will argue here.

What makes a graph a phylogenetic tree or network – direction

Kong et al. argue that a line graph needs to be directed (ie. the edges indicate a time direction) in order to represent a phylogeny, which is a good point. After all, a phylogenetic tree is a directed (rooted) branching diagram that represents the hypothesized relationships among the organisms under study. 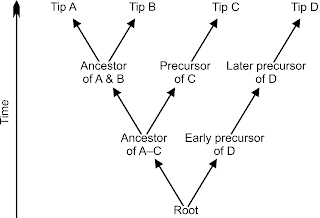 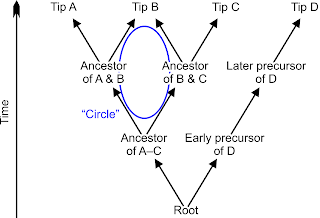 However, following this argument, few inferred trees are directly a phylogenetic tree, either — including the Nextstrain-generated tree on the GISAID page that is promoted by Mavian et al. 2020 (which is another comment to Forster et al., focusing on data issues). Irrespective of which criterion we use to optimize the tree, almost all trees we infer (with no matter what tree inference software) are unrooted graphs — in general, we root them only after the analysis, by defining one leaf or a subtree as an outgroup. (Note, this includes those based on parsimony, the method of choice of the Willi-Hennig Society and Cladistics to this day.) 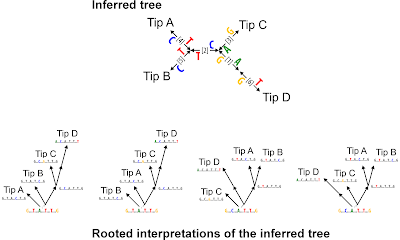 The difference between inference and interpretation: Using the tip sequences, we can infer a single most parsimonious (6-step long; using PAUP*'s branch-and-bound or NETWORK's MJ algoritm), but also most likely and shortest (distance-based), unrooted tree. By defining a root – here: one taxon designated as outgroup and assuming that all single-taxon-unique sequence patterns are autapomorphies – we can interpret the inferred tree as four different phylogenetic trees.
The same can be said of MJ networks — outgroup rooting can be applied (Finding the CoV-2 root).

A phylogenetic relationship focuses on ancestors, which, for the purpose of inferring a phylogenetic tree, are considered to be purely hypothetical, although they are not hypothetical in a MJ network (or related graphs). We can easily create character sets where the inferred tree will not "represent the hypothesized relationship". Most parsimony studies show a strict consensus cladogram of most-parsimonious trees (MPT). This is unproblematic, as long as all leaves have the same age, and all of the cladogenic events resulted in unique, lineage-conserved character patterns. We then:
would only infer but a single MPT;have no zero-length branches.So, following Hong et al.'s logic, any dataset that results in more than one MPT and has subtrees including zero-length branches (like our example above) cannot qualify as phylogenetic trees.

Median-joining networks are, like MP trees (both use parsimony as the optimality criterion), vulnerable to homoplasy (Using Median networks to study SARS-CoV-2; see also Mavian et al. 2020), but while a MP tree (or any other tree we infer) cannot resolve ancestor-descendant relationships, MJ networks can (see eg. Why do we still use tree for Neanderthal genealogy). 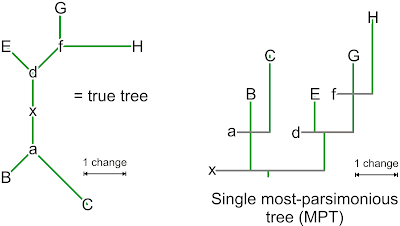 Median (or MJ) network, left, and MPT, right, inferred from a perfect matrix. "x" = all-ancestor, ie. represents the root. "a" is the ancestor of "B" and "C", "d" of "f" to "H", "f" of "G" and "H". While the median networks depicts all ancestor-descendant relationships, the MPT only depicts them indirectly by trichotomies including the ancestor as zero-length branch. 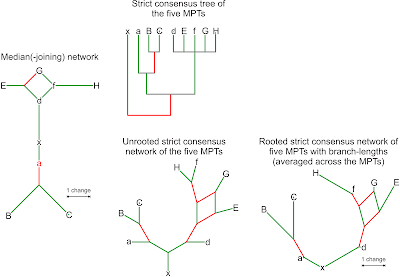 Imperfect matrices (data including homoplasy) lead to wrong edges and branches. Being able to recognize ancestors, the MJ network comes closer to the phylgoenetic tree (same as above; from Clades, cladograms, cladistics, and why networks are inevitable).
Hence, Bandelt et al.'s (1999) statement, as cited by Kong et al., that “reconstructing phylogenies from intraspecific data ... is often a challenging task because of large sample sizes and small genetic distances between individuals”. Such data results in largely uninformative, comb-like MPT strict consensus trees. This is because identical sequences, equally probable alternative pathways, non-dichotomous differentiation patterns, and ancestral sequence variants present in the data increase the number of MPTs (sometimes to near-infinity). This leads to the collapse of branches in the strict consensus tree used to summarize the MPT sample. Probabilistic methods struggle, too, because the likelihood surface of the tree space is too flat to make a call.

To discredit the MJ network, Kong et al. then "... focus on its phenetic nature."

There is a tendency among cladists to dismiss a method as "distance-based", as this is treated as synonymous with phenetics. In reply, Joe Felsenstein commented on this alleged fundamental difference between distance-based and parsimony methods of tree inference (Felsenstein 2004, Chapter 10, p. 145f, The irrelevance of classification):
The terminology is also affected by the lingering emphasis on classification. Many systematists believe that it is important to label certain methods (primarily parsimony methods) as "cladistic" and others (distance matrix methods, for example) as "phenetic". These are terms that have rather straightforward meaning when applied to methods of classification. But are they appropriate for methods of inferring phylogenies? I don't think they are. Making this distinction implies that something fundamental is missing from the "phenetic" methods, that they are ignoring information that the "cladistic" methods do not. In fact, both methods can be considered to be statistical methods, making their estimates in slightly different ways.The following chapter in Felsenstein's book (Chapter 11, pp. 147–175) deals exclusively with the "phenetic" distance matrix methods because they were the first to be used to infer phylogenetic trees (their limitations are outlined on pp. 174f).

For instance, the Neighbor-joining (NJ) algorithm (Felsenstein 2004, p.166ff) is a cluster algorithm, which finds a phylogenetic tree fulfilling either the Minimum evolution (ME, p. 159f) or Least-squares (LS) criteria (p. 148ff). Thus, the tree inferred is, indeed, based on a distance-matrix via NJ, but it is not a cluster dendrogram — instead, it is a ME or LS optimised phylogenetic tree. Similarly, FastTree, IQTree, and RAxML are extremely fast programmes to infer Maximum likelihood (ML) phylogenetic trees; but, while FastTree and IQTree start with "phenetic" Neighbor-joining trees, RAxML (like GARLI before) infers first a quick-and-dirty parsimony tree. The final product in both cases is a topology optimized under ML, and the results are hence ML trees and not distance-based or MP trees (even though they started that way).

The final MJ network shows the most parsimonious evolutionary pathways that change one sequence type into another. When you infer it with the NETWORK program, all inferred mutations are mapped onto the final graph, and, using the Steiner post-analysis step, you can look through all of the MP trees that have been included in this graph. However, according to Kong et al. these are not MP trees:
[Following Farris (1970] Invoking principles of parsimony does not validate a phenetic technique as being a phylogenetic method. Indeed, the best Steiner trees are not necessarily the most parsimonious trees.Kong et al. did not provide any real-world data examples; possibly because they would be very difficult to find. Just take my simple example above — clearly the MJ tree is actually a most-parsimonious solution to the data. Alternatively, you could take any data set for which you can infer plausible MPTs with (ie. data where the rate of change is low), eg. using the TNT program, and compare the result – the Consensus network of all MPTs, not the collapsed strict consensus tree (Stop using cladograms!) – with the Steiner trees inferred using NETWORK and the MJ algorithm.

Kong et al.'s final point is:
BEA99 [ie. Bandelt et al. 1999] stressed that median vectors can be interpreted biologically as existing unsampled or extinct ancestral sequences (i.e. they can represent missing intermediates; Fig. 3). However, a median vector in an MJ analysis is a sequence generated by majority, and is a mathematically drawn point in the final MJN that connects a triplet of sequences. The resulting “evolutionary paths in the form of cycles” (BEA99, p. 37) merely illustrates the failure of the algorithm to choose between alternative, equally optimal connections due to the modification of Kruskal’s algorithm. Consequently, a cycle represents an analytical artefact rather than an evolutionary scenario (Salzburger et al., 2011).It is obvious to anyone who has ever used MJ networks, and is familiar with their own data, that Medians are likely to be ancestors, and that medians separated by parallel edge bundles are usually alternative ancestors. But, like all inferences, MJ networks may not capture the complex truth. 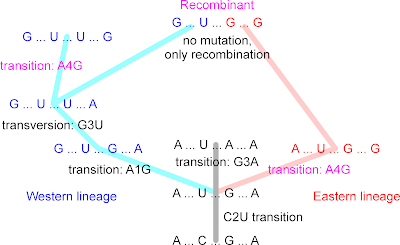 A phylogeny involving a recombination ... 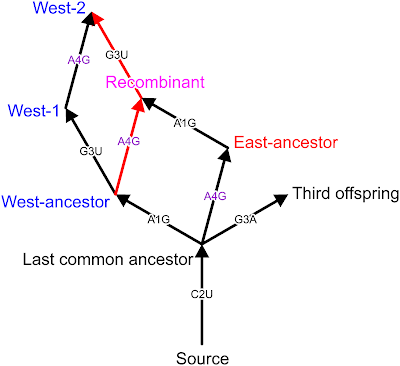 ... and the MJ network that can be inferred on the same data including two wrong edges (red). The West-1/East-ancestor recombinant is resolved as the product of hybridisation of the West- and East-ancestors, while West-2, a descendant of West-1, is resolved as hybrid of West-1 and the recombinant. Any tree included in the network would have 7 steps (ie. is most-parsimonious).These reconstructed medians thus do bring Kong et al. to their only valid point, which, however, doesn't apply to the method as proposed, but is instead a common misinterpretation of MJ networks — their cycles do not necessarily reflect reticulation.

Bandelt et al. (1999) clearly state that the MJ network is only an approximation, to deal with complex situations. The cycles usually represent equally optimal alternative pathways, and are usually the result of homoplasy but not reticulation. The final goal is hence to get a graph with as few reticulation as possible but as many as are necessary (see NETWORK manual on selection of the epsilon parameter and weighting).

As I showed in an earlier post using actual CoV-2 data, only this part of anchéz-Pacheco et al.'s critique of Forster et al.'s paper is valid — we do need to be very careful before we interpret parallel edge bundles in virus-based (or other) MJ networks as being evidence for reticulation. MJ networks can be phylogenetic networks, but they are still consensus networks of competing, equally parsimonious alternatives. If we take a strict position, then most MJ networks are probably not phylogenetic networks; but neither are all trees phylogenetic trees.

Everything else in their comment is simply cladistic lore. Most importantly, their critique ignores the fact that the obvious alternative to MJ networks when analysing low-divergent virus data, which is parsimony-based trees, has exactly the same data-inherent shortcomings — ie. vulnerability to homoplasy, impossibility to detect and reconstruct recombination. They also have an extra one: they treat all samples to be of the same age and generation, and thus have to resolve actual ancestors as being sisters. Which increases the number of possible, equally parsimonious solutions. 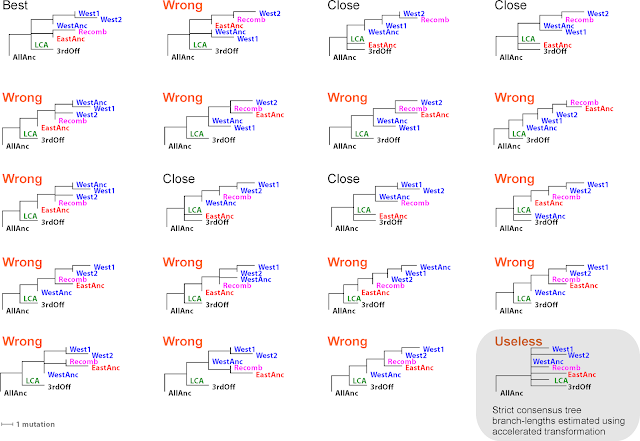 The 19, 7-step long MPTs that can be inferred for the recombination example using PAUP*'s branch-and-bound algorithm – rooted with the Source, the common ancestor of all ("AllAnc") – and their strict consensus tree (gray background, 11-steps long). "Best" shows a phylogenetic tree that comes closest to the true tree: ancestors are resolved as zero-length tips in clades including their descendants. "Close" denotes trees that only misplace the recombinant (purple), which – being a recombinant of the East ancestor (red) and West-1 (blue) – should be placed in a tree as sister to either parent.
The consequence of this is that what Sánchez-Pacheco et al. and Kong et al. criticize about the MJ networks applies even more to the predominately used phylogenetic trees. As David pointed out earlier (Problems with the phylogeny of coronaviruses): virus trees may be inferred using phylogenetic methods but they effectively depict only similarity patterns.