The Netherlands Is More Than Just Tulips And Sea-dykes


When I look out the window of my workroom at home, several minutes can easily pass without a person being in view. This is quite typical of Swedish countryside. During the times I have been in the Netherlands, however, I have never experienced even one whole minute without a person walking, or more likely cycling, into view. The Netherlands is the most densely populated country in Europe (excluding all of the really tiny countries), with about 500 people per square kilometre of actual land area.

Given this unexpected fact, it seems worthwhile to list some of the other facts about the Netherlands that I bet you never knew. Many of the data come from the Eurostat database and the Statistics Netherlands database, but also from miscellaneous other sources on the web. 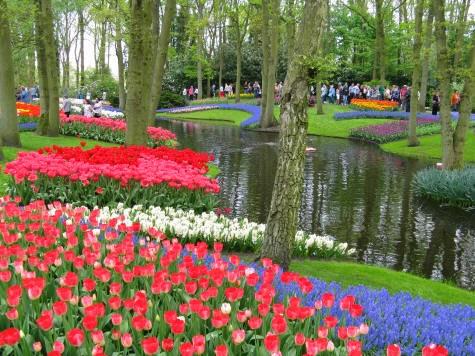 Bulb season at the Keukenhof Gardens, in the Netherlands.
In this period the Netherlands exported 4,600 million kilograms of vegetables with a market value of 4,200 million Euros. It is worth noting that a considerable amount of the export is actually re-export, particularly of products imported from south-east Asia. Nevertheless, about 24,000 hectares of the Netherlands is devoted to vegetables in total, plus about 19,000 ha dedicated to fruit.

Hardly anyone realizes that the Netherlands is the world’s biggest producer of onions, with 1,353,000 tonnes in 2012. For comparison, Spain produced only 1,169,700 tonnes. The Netherlands is also the leading exporter of button mushrooms (40% of the export market) followed by China, France, Spain, Hong Kong, Taiwan, Indonesia and South Korea. The U.S.A. is the largest consumer, accounting for one third of World production.

The Dutch are the biggest exporters of seed in the world, exporting some 1,500 million Euros worth every year. About 15,000 hectares of land is given over to nurseries and perennial plants, and about 3,000 ha to floricultural crops. Much of the horticultural production is under glass (c. 10% of the area). For example, within the European Union, Spain has about 65,000 hectares of commercial glasshouses, and Italy has c. 35,000 ha; but the Netherlands is third, with c. 10,000 ha. 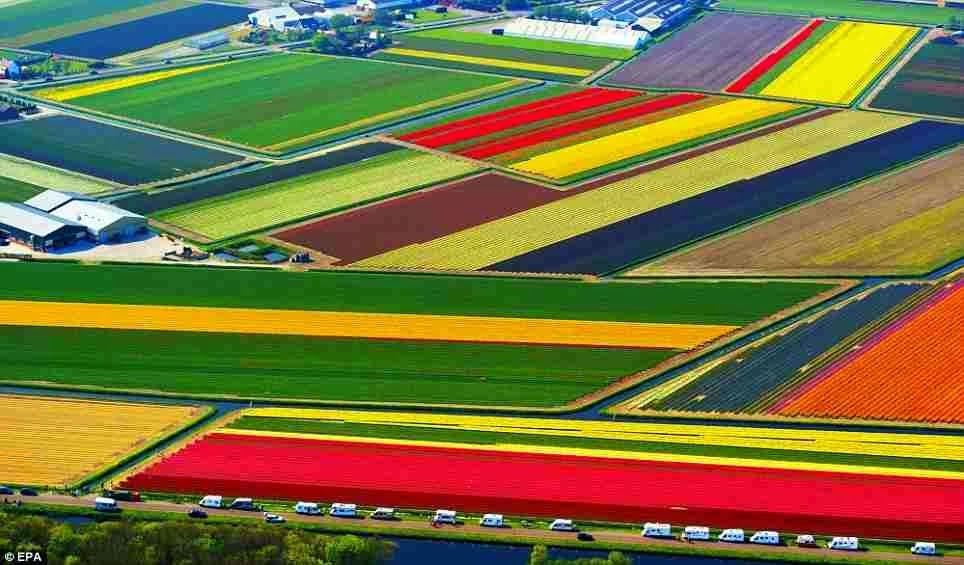 Tulip season in South Holland. Note the line of tourist camper vans.
The introduction of the tulip to Europe is usually attributed to Ogier de Busbecq, who sent the first tulip bulbs and seeds to Vienna in 1554 from Turkey in the Ottoman Empire. The Turks still tell the story of the first recipients trying to fry and eat the bulbs, rather than growing them! Tulip popularity and cultivation in the Netherlands probably dates from 1593, when the Flemish botanist Carolus Clusius planted his collection of tulip bulbs at the Hortus Botanicus in Leiden. To this day, the area immediately north of Leiden is the heart of the Dutch bulb industry (see the picture above).

However, in spite of all of this plant production, most of the farmland in the Netherlands is actually given over to animals, not plants. Only about 30% of the farmland is dedicated to plants, while 56% is reserved for grazing livestock, as shown in the next graph.

Annual area of Dutch farmland this century. Note the log scale.
Given all of this primary production, it is not unexpected that the Netherlands has the best balance of trade for raw materials within the European Union, with a surplus of 4,500 million Euros per year (see the first network below). This is followed by Sweden (3,000 million). The only other EU countries with a positive balance are Denmark, Latvia, Romania, Ireland and Estonia. Last are Italy and Germany, each with a deficit of -12,000 million Euros per year.

NeighborNet (based on manhattan distance) of the 2001-2012 data for international trade of raw materials
for the member countries of the European Union. Countries near each other in the network have a similar
balance of trade, while countries further apart are progressively more different from each other.
Furthermore, the Netherlands has the second best overall balance of trade (i.e. including manufacturing) in the European Union, with a surplus of 37,000 million Euros per year (see the next network). This is way behind Germany (153,000 million), but just ahead of Ireland (35,500 million). The only other countries to have consistently had a positive balance of trade this century are Sweden, Belgium and Denmark. The United Kingdom has fared much the worst, with a deficit of -116,000 million Euros per year.

NeighborNet (based on the manhattan distance) of the 2001-2012 data for total international trade
for the member countries of the European Union.  Countries near each other in the network have a similar
balance of trade, while countries further apart are progressively more different from each other.
The Netherlands is also famous for having 50% of its alleged land area less than 1 metre above sea level (see the map below); and indeed 20% of the land is actually below sea level. Throughout the latter region, the water flows uphill into the rivers and canals, a feat that is not usually achieved anywhere else on the planet. This has traditionally been accomplished with windmills, of course.

This situation has occurred because during the first millenium AD much of the land was washed out into the North Sea, and during the second millenium the Dutch tried to get it back again. In particular, Lake Flevo became the South Sea, and was then reclaimed as Lake IJssel. These days, rather massive sea-dykes are used to keep the water at bay. 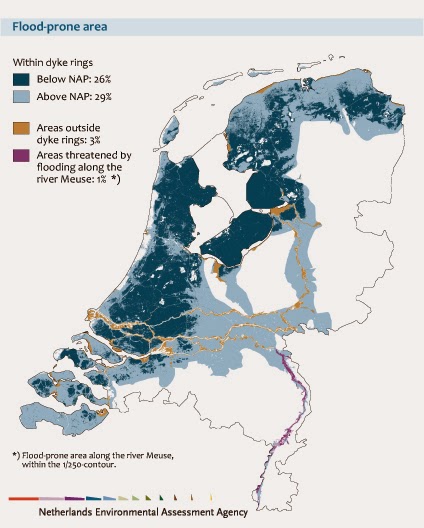 The Netherlands with respect to the Amsterdam Ordinance Level (NAP).
So, where are the Dutch managing to do all of this agricultural production? I suspect that the creators of Dr Who invented the Tardis after a visit to the Netherlands, since clearly the Netherlands is larger on the inside than it appears to be on the outside.