In an effort to do something a little different, I picked up two of Meng's new line of "World War Toons" tanks - the Tiger I and King Tiger. These super-deformed tanks are based on vehicles from the video game of the same name, and are part of a full line of popular WW2-era tanks. There's no scale listed but they range from nominally 1/35 to 1/48 scale and would work well for conversions for alternative history or science fiction gaming. Prices are extremely low, ranging between $9-$15, depending on the model. I believe I spent about $25 for both of the Tigers. 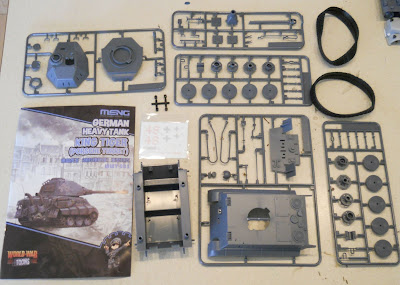 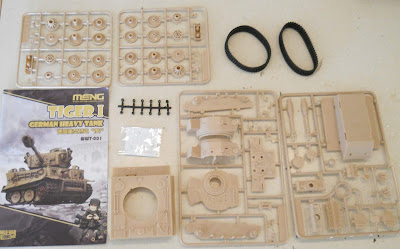 Plastic quality is very good considering the price, though there was a lot of mold release agent on the sprues when I opened the boxes but this was easily cured by a bath in warm dishsoap water. Sprues are organized well being generally divided by part type. Each model includes a great full-color instructions booklet, a few nice decals, rubberized tracks, and poly caps. The poly caps are useful in the Tiger I if you want free spinning wheels/tracks but, oddly, the King Tiger's roadwheels need to be snapped/glued in (even though the kit contains polycaps), preventing wheel spin.

Assembly is straightforward, though often requires a careful review of the pictures to ensure parts (especially tools) are placed in the right holes. There are some minor fit issues - mostly in the Tiger I - that requires some filling and sanding. Unfortunately, as all the stowage and tools have corresponding holes in hull, there isn't an option to not include them. Though this isn't technically a "snap fit" model, there are a lot of part that snap into place with little or no glue. In fact, in the pictures below, the hull of the King Tiger isn't joined because I want to be able to paint and weather the lower hull and, due to the snap pin assembly, it would be impossible to take apart once together.

Both models went together fairly quickly, being finished in a few sittings over the course of an evening. The Tiger I presented a bit more fit issues, especially the rear hull plate which had large gaps along either side of the hull itself. It wasn't a big deal, just annoying. All in all, these are great models for the price, very approachable for the younger or casual modeler and perfect for conversion fodder for gamers.

The Tiger I is a bit larger and taller than the King Tiger and would be very suitable for 40K in an Ork army. 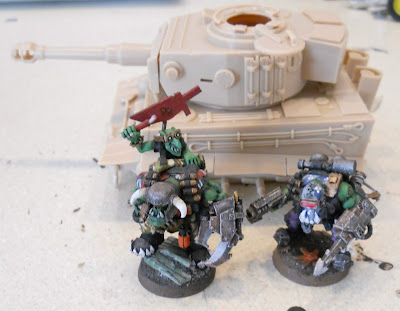 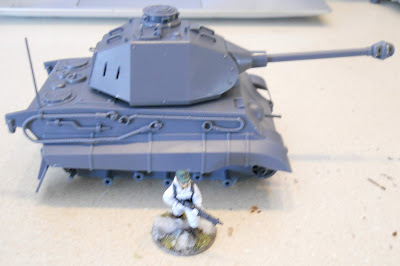 Pros:Very unique modelsEasy to assemble, with lots of pseudo-"snap fit" parts - perfect for younger modelersGreat bases for conversionExtremely cheap price pointCons:Some fit issues, especially in the Tiger ITools and stowage must be includedNot a lot of crisp detailsRubberized treads are difficult to paint and weather