Keeping It Simple In Phylogenetics


This is a post by Guido, with a bit of help from David.

There's an old saying in physics, to the effect that: "If you think you need a more complex model, then you actually need better data." This is often considered to be nonsense in the biological sciences and the humanities, because   the data produced by biodiversity is orders of magnitude more complex than anything known to physicists:
The success of physics has been obtained by applying extremely complicated methods to extremely simple systems ... The electrons in copper may describe complicated trajectories but this complexity pales in comparison with that of an earthworm. (Craig Bohren)Or, more succinctly:
If it isn’t simple, it isn’t physics. (Polykarp Kusch)So, in both biology and the humanities there has been a long-standing trend towards developing and using more and more complex models for data analysis. Sometimes, it seems like every little nuance in the data is important, and needs to be modeled.

However, even at the grossest level, complexity can be important. For example, in evolutionary studies, a tree-based model is often adequate for analyzing the origin and development of biodiversity, but it is inadequate for studying many reticulation processes, such as hybridization and transfer (either in biology or linguistics, for example). In the latter case, a network-based model is more appropriate.

Nevertheless, the physicists do have a point. After all, it is a long-standing truism in science that we should keep things simple:
We may assume the superiority, all things being equal, of the demonstration that derives from fewer postulates or hypotheses. (Aristoteles) It is futile to do with more things that which can be done with fewer. (William of Ockham) Plurality must never be posited without necessity. (William of Ockham) Everything should be as simple as it can be, but not simpler. (Albert Einstein)To this end, it is often instructive to investigate your data with a simple model, before proceeding to a more complex analysis.

In the case of phylogenetics, there are two parts to a model: (i) the biodiversity model (eg. chain, tree, network), and (ii) the character-evolution model. A simple analysis might drop the latter, for example, and simply display the data unadorned by any considerations of how characters might evolve, or what processes might lead to changes in biodiversity.

This way, we can see what patterns are supported by our actual data, rather than by the data processed through some pre-conceived model of change. If we were physicists, then we might find the outcome to be a more reliable representation of the real world. Furthermore, if the complex model and the simple model produce roughly the same answer, then we may not need "better data". 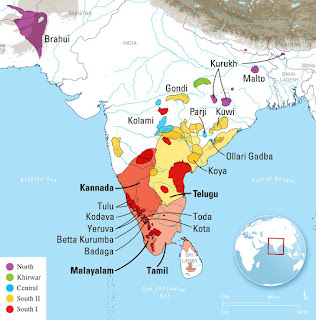 The preferred and unconstrained result of the Bayesian optimization is shown in their Figs 3 and 4 (their Fig. 2 shows the neighbour-net). 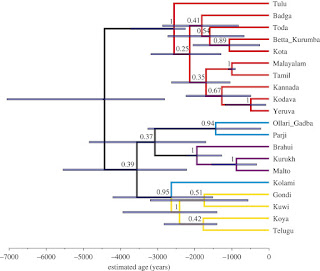 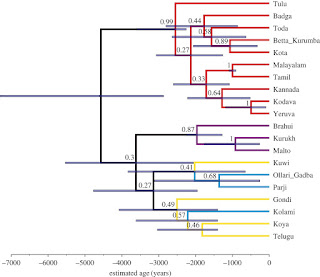 Fig. 4 of Kolipakam et al. (2018), result of the Bayesian dating using the same model but not constraints. The Central and South II group is mixed up.
As you can see, many branches have rather low PP support, which is a common (and inevitable) phenomenon when analyzing non-molecular data matrices providing non-trivial signals. This is a situation where support consensus networks may come in handy, which Guido pointed out in his (as yet unpublished) comment to the paper (find it here).

On Twitter, Simon Greenhill (one of the authors) posted a Bayesian PP support network as a reply. 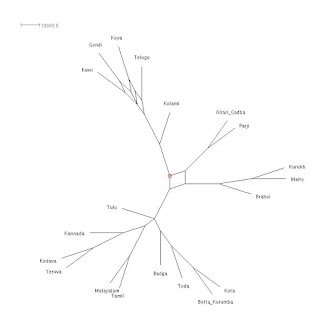 A PP consensus network of the Bayesian tree sample, probably the one used for Fig. 3 of Kolipakam et al. 2018, constraining the North, South I, and South II groups as clades (S. Greenhill, 23/3/2018, on Twitter).
Greenhill, himself, didn't find it too revealing, but for fans of exploratory data analysis it shows, for example, that the low support for Tulu as sister to the remainder of the South I clade (PP = 0.25) is due to lack of decisive signal. In case of the low support (PP = 0.37) for the North-Central clade, one faces two alternatives: it's equally likely that the Central Parji and Olawi Godha are related to the South II group which forms a highly supported clade (PP = 0.95), including the third language of the Central group (one of the topological alternatives tested by the authors).

A question that pops up is: when we want to explore the signal in this matrix, do we need to consider complex models?

The maximum-likelihood inference used here is naive in the sense that each binary character in the matrix is treated as an independent character. The matrix, however, represents a binary sequence of concepts in the lexica of the Dravidian languages (see the original paper for details).

For instance, the first, invariant, character encodes for "I" (same for all languages and coded as "1"), characters 2–16 encode for "all", and so on. Whereas "I" (character 1) may be independent from "all" (characters 2–16), the binary encodings for "all" are inter-dependent, and effectively encode a micro-phylogeny for the concept "all": characters 2–4 are parsimony-informative (ie. split the taxon set into two subsets, and compatible); the remainder are parsimony-uninformative (ie. unique to a single taxon). 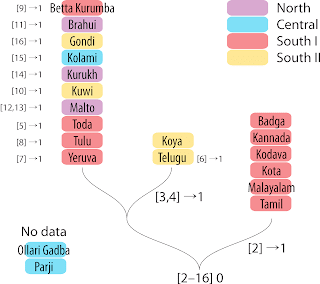 The binary sequence for "All" defines three non-trivial splits, visualized as branches, which are partly compatible with the Bayesian tree; eg. Kolami groups with members of South I, and within South II we have two groups matching the subclades in the Bayesian tree.

Two analyses were run by the original authors, one using the standard binary model, Lewis’ Mk (1-paramter) model, and allowing for site-specific rate variation modelled using a Gamma-distribution (option -m BINGAMMA). As in the case of morphological data matrices (or certain SNP data sets), and in contrast to molecular data matrices, most of the characters are variable (not constant) in linguistic matrices. The lack of such invariant sites may lead to so-called “ascertainment bias” when optimizing the substitution model and calculating the likelihood.

Hence, RAxML includes an option to correct for this bias for morphological or other binary or multi-state matrices. In the case of the Dravidian language matrix, four out of the over 700 characters (sites) are invariant and were removed prior to rerun the analysis applying the correction (option -m ASC_BINGAMMA). The results of both runs show a high correlation— the Pearson correlation co-efficient of the bipartition frequencies (bootstrap support, BS) is 0.964. Nonetheless, BS support for individual branches can differ by up to 20 (which may be a genuine or random result, we don't know yet). The following figures show the bootstrap consensus network of the standard analysis and for the analysis correcting for the ascertainment bias. 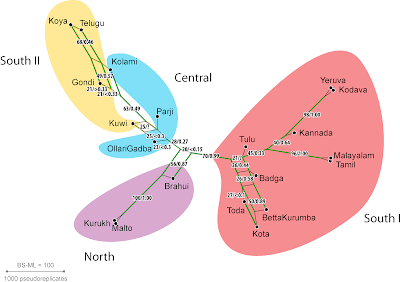 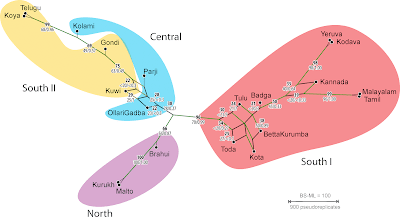 ML-BS consensus network for the analysis correcting for the ascertainment bias. BSasc annotated at edges in bold font, with BSunc and PP (graph before) provided for comparison. Note the higher tree-likeness of the graph.
Both graphs show that this characters’ naïve approach is relatively decisive, even more so when we correct against the ascertainment bias. The graphs show relatively few boxes, referring to competing, tree-incompatible signals in the underlying matrix.

They also show that from a tree-inference point of view, we don't need highly sophisticated models. All branches with high (or unambiguous) PP in the original analysis are also inferred, and can be supported using maximum likelihood with the simple 1-parameter Mk model. This also means that if the scoring were to include certain biases, the models may not correct against this. At best, they help to increase the support and minimize the alternatives, although the opposite can also be true.

For relationships within the Central-South II clade (unconstrained and constrained analyses), the PP were low. The character-naïve Maximum likelihood analysis reflects some signal ambiguity, too, and can occasionally be higher than the PP. BS > PP values are directly indicative of issues with the phylogenetic signal (eg. lack of discriminative signal, topological ambiguity), because in general PP tend to overestimate and BS underestimate. The only obvious difference is that Maximum likelihood failed to provide support for the putative sister relationship between Ollari Gadba and Parji of the Central group.

The crux with using trees

When inferring a tree as the basis of our hypothesis testing, we do this under the assumption that a series of dichotomies can model the diversification process. Languages are particularly difficult in this respect, because even when we clean the data of borrowings, we cannot be sure that the formation of languages represents a simple split of one unit into two units. Support consensus networks based on the Bayesian or bootstrap tree samples can open a new viewpoint by visualizing internal conflict.

This tree-model conflict may be genuine. For example, when languages evolve and establish they may be closer or farther from their respective sibling languages and may have undergone some non-dichotomous sorting process. Alternatively, the conflict may be due to character scoring, the way one transforms a lexicon into a sequence of (here) binary characters. The support networks allow exploring these phenomena beyond the model question. Ideally, a BS of 40 vs. 30 means that 40% of the binary characters support the one alternative and 30% support the competing one.

In this respect, historical-linguistic and morphological-biology matrices have a lot in common. Languages and morphologies can provide tree-incompatible signals, or contain signals that infer different topologies. By mapping the characters on the alternatives, we can investigate whether this is a genuine signal or one related to our character coding. 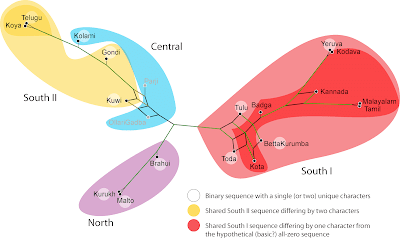 Mapping the binary sequences for the concept "all" (example used above to illustrate the matrix basic properties; equalling 15 binary characters) on the ML-BS consensus network. We can see that its evolution is in pretty good agreement with the overall reconstruction. Two binaries support the sister relationship of the South II languages Koya and Telugo, and a third collects most members of the South I group. All other binaries are specific to one language, hence, do not produce a conflict with the edges in the network.