Eventually, I have aspirations to start heavily playing the Interwar Period as I build up forces at an almost glacial slowness. The first unit were Tsuba's excellent "Red Marines" from the German Revolution and I will likely be expanding upon that force with the newly released Spartacists. But, as I covered in my review of this Trenchworx Mk IV kit, I got an almost free heavy hitter for the Freikorps.
I did a lot of research going in to painting this project but ultimately decided that, although the Freikorps had very few tracked AFVs in their fighting during the 1920s, I really wanted something a little more generic than the famous Marie Chen or Ermil present during the January Uprising. I ultimately ended up using the Fahrpanzer 5.3cm as a basis for the distinctive hard-edge, lined four-tone camouflage as well as Marie Chen's insignia for the skull and crossbones.


The problem came in looking at this picture before painting and not opening it again until painting was done. As such, the orange is too orange, the yellow too yellow, and the red brown is too brown! Oops - the green looks good though! So, let this be a lesson, check your source material several times throughout the painting process to ensure your colors are correct.

No decals here! The Skull and Crossbones insignias are all individually done with a brush. I'm actually really quite proud of these. The trick was to draw the ovoid outline of the skull in White, fill it in completely, and then paint the eye/nose sockets, teeth, and cross in the color underneath the skull. The bones are simply two heavy lines crossed at low angles and then two large dots are painted on all ends.

Weathering is done in oils and finished with Secret Weapon dry pigments. 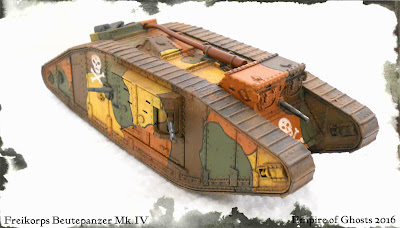 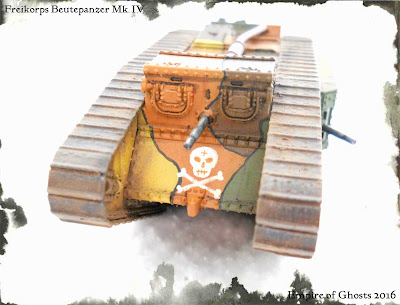