In a previous blog post (Who first drew a family tree as a tree?), I pointed out that one of the candidates for drawing the first family tree as a tree (as opposed to a stick diagram) is Giovanni Boccaccio, in his Genealogia Deorum Gentilium (On the Genealogy of the Gods of the Gentiles) of 1370 CE.

However, there are arguments against this attribution. For example, Boccaccio's original pedigree was: (1) not about real people; (2) more like a vine rather than a tree; and (3) not rooted at the bottom. The first version of his pedigree that was actually tree-like and rooted at the bottom was in the Italian translation from 1547 CE (and again in the 1554 edition).

Recently, Jean-Baptiste Piggin has indicated in his blog that he is looking for the Oldest family tree. He writes:
What I am looking for here is the earliest example of a thing named "family tree" or "albero genealogico" or "Stammbaum" or "arbre de famille" ... these things had unwitting precursors in previous centuries. There were even 12th-century artists who took pre-existing stemmata and flipped them upside down to depict them as trees. But these were experiments or flukes, not genealogical trees as a general cultural phenomenon.The conscious idea of presenting a complete family line connected by a woody trunk first shows up in southern German woodcuts in the late 15th century ... The tree as a recognizable category of art, a product where artist and customer know what to expect, only shows up later in the sixteenth century. It looks semi-natural, has a bottom root and clearly tiered generations.In his blog post Piggin mentions various attempts (at drawing pedigrees) between their first known appearance in c. 1000 CE (see The first royal pedigree) and the late 1500s, when Scipione Ammirato (an Italian writer and historian) set up a cottage industry producing family trees for the nobility. 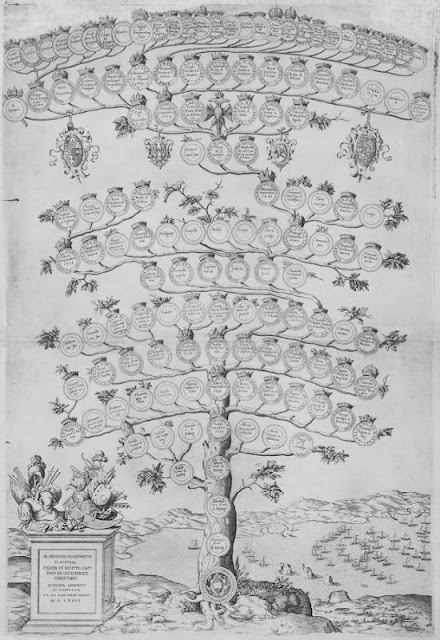 Highlights of the history of tree-like pedigree diagrams, as currently known, include (with links to copies of the diagrams):

1370 Boccaccio – first pedigree drawn as a vine, with the root at the top
1475 Rodericus (Der Spiegel des Menschlichen Lebens) – multiple intertwining vines
1492 Conrad Bote (Cronecken der Sassen) – first tree, using family shields in place of names
1515 Albrecht Dürer (Ehrenpforte, engraving) – unbranched woody vine
1536 Robert Peril (Family Tree of the House of Habsburg, engraving) – tree, with people along the trunk only, not on the branches
1547 Boccaccio – first version of his pedigree drawn as a tree
1576 Scipione Ammirato – first of his trees, with people along the trunk as well as the branches. Ammirato's first tree is shown above.

The 12th century pedigree that Piggin refers to, and dismisses as a candidate for a real tree, is discussed in his blog post on the Erlangen tree. This pedigree is from one of the copies of the Ekkehardi Chronicon Universale (Chronicle of Ekkehard of Aura, or Chronicle of Frutolf), drawn in c. 1140. The pedigree itself is based on the one shown in my post on The first royal pedigree, except that Cunigunde of Luxembourg (the focus of that earlier pedigree) is strangely absent. The version of interest is shown below, from the Universitätsbibliothek Erlangen-Nürnberg (manuscript 406, referred to as the Erlangen Codex, page 204v).

What is unique about this version of the pedigree is that it has been turned upside down, so that the root is at the bottom, making it look more tree-like. (See also my post on Does it matter which way up a tree is drawn?) As Piggin notes (NB: he uses the word "stemma" to refer to the early versions of pedigrees, with the names in roundels, connected by lines):
Other manuscripts of the Ekkehard Chronicle present the Stemma of Cunigunde more or less faithfully, but the scribe-artist of the Erlangen codex decided to have some fun with it. He inverted it, and drew the figure of Arnulph at the left and Arnulph's saintly mother Begga at right. [Arnulf is the person named at the root of the pedigree.]What change in medieval culture had made this startling inversion of the stemma not just possible, but acceptable to the customer, probably the Cistercian Monastery of Heilsbronn in Germany, which became the long-term owner of this codex? Is this quirky conversion on an artist's desk the precise moment when the family tree, later to become a prestigious badge of nobility, was invented?As I have already pointed out, inverted stemmata made to resemble trees with roots in soil are a rarity before the 16th century. It was 16th-century scholars like Scipione Ammirato who deserve the credit as the true originators of the family tree, not the medieval artists who created trees of ancestry more or less by fluke.