Most people don't want to think about cancer, but everyone over the age of 40 should do so, and do so regularly. This is because early diagnosis dramatically increases your chance of survival, and early diagnosis is almost entirely up to you — you will be the first person to notice the symptoms. To put it bluntly, you can ignore the first signs of cancer and thus live for another five years or so, or you can got to a doctor and thus live for another twenty. The choice is yours, not Fate's.

Cancer is a disease of old age. Back in the dim dark past, people usually lived only until about 40 years of age, and so cancer was not a big problem. It is doubtful that it was a major cause of death amongst humans. But as we slowly but surely have increased our life expectancy, cancer has become more and more of an issue. For example, for people in the USA in 2010, cancer was the No. 1 cause of death for people aged between 40 and 80, as shown in this table. Indeed, you will note that for females cancer was in one of the top two spots for all age groups.

The incidence of cancer varies dramatically among different organs, and this variation has itself changed over time. In the USA, lung cancer has been the biggest cause of cancer deaths for males since the 1950s and for females since the 1980s, as shown in the next graph. In both cases the death rate has decreased since the recent active attempts to reduce the smoking epidemic. [Note: medically it is considered to be an epidemic, just as obesity is currently considered an epidemic in the Western world.] 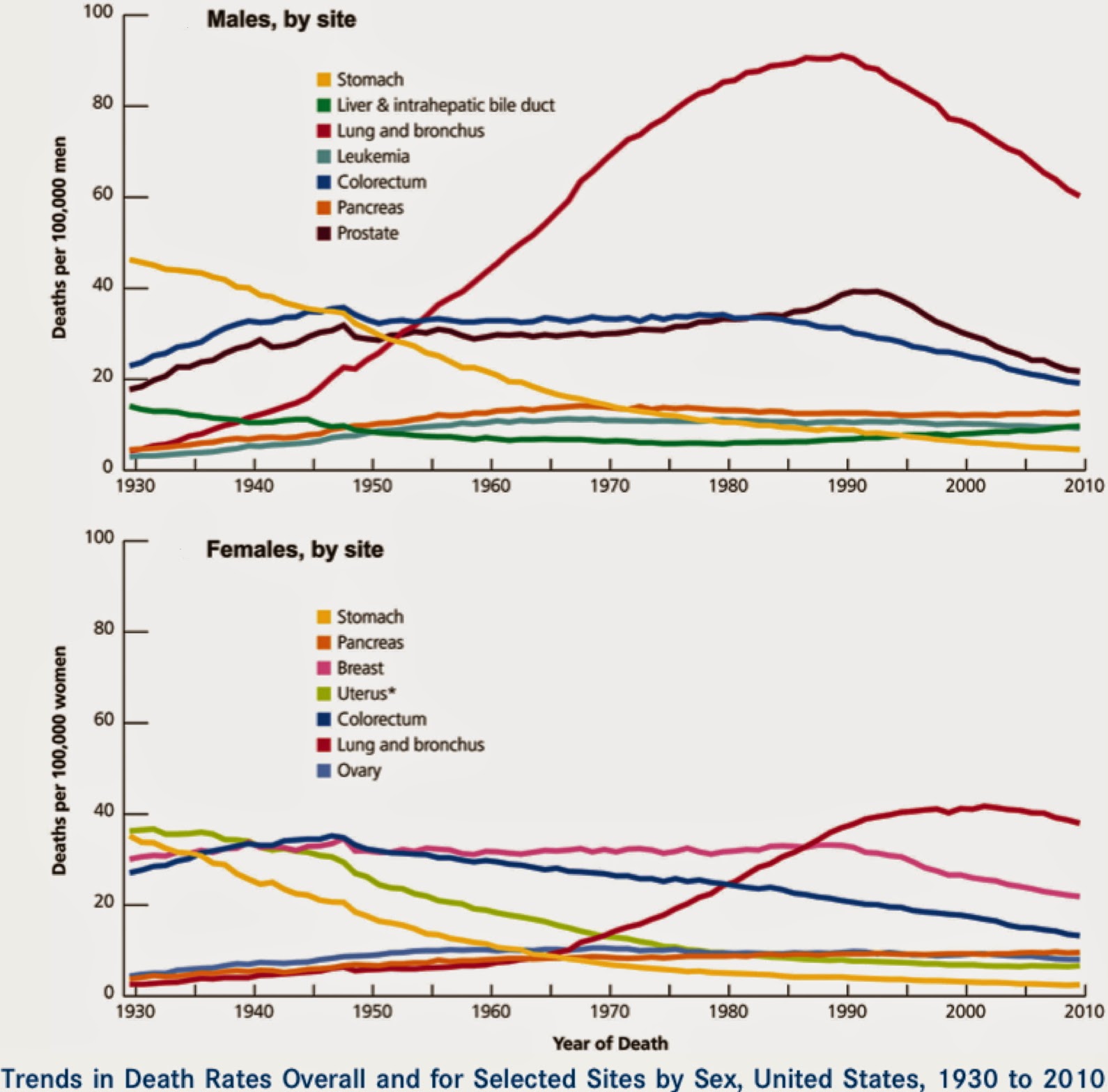 The second biggest cause of death for males is prostate cancer, and for females it is breast cancer, followed in both cases by cancer of the colon and/or rectum. In all of these cases the death rate is decreasing through time, ostensibly due to changes in risk factors but most importantly the introduction of screening.

Screening is particularly important for cancer of the reproductive organs. There is only one "major" cancer-related organ for males (the prostate), but for females there are three: the breasts, the uterus and the ovaries. As you can see in the next graph, the stage at which the cancer is first diagnosed varies quite a lot among these organs. 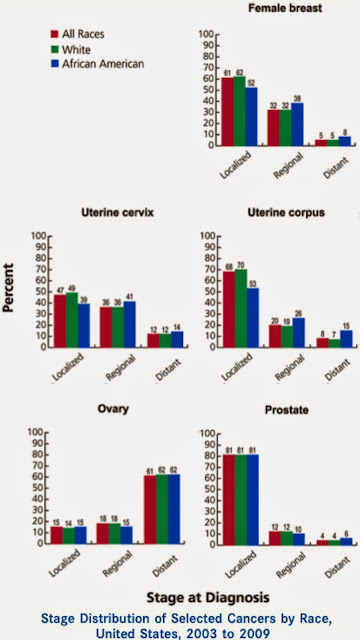 To explain the stages: (i) localized means that the cancer is confined to one part of the organ concerned; (ii) regional means that the cancer has spread throughout the organ; and (iii) distant means that it has spread from there to other nearby organs. For effective treatment, and therefore maximum probability of survival, the cancer needs to be detected before it has reached the third stage. You will note that this is particularly problematic for ovarian cancer, which is usually not diagnosed until this stage.

Interestingly, death rates due to cancer are not randomly distributed in space, as shown in the next graph for the states of the USA. The data analyzed were for death rate (per 100,000 people) for 2006-2010 for the most common types of cancer (breast, colorectum, lung, non-hodgkin lymphoma, pancreas, prostate). I used the manhattan distance to evaluate the multivariate relationships in the data, and displayed this using a NeighborNet.

The graph shows the relationships among the different states. States near each other in the network have similar death rates for the different cancers, while states further apart are progressively more different from each other.

The states mostly form a gradient of increasing cancer death rates from the top-left towards the bottom of the network. Utah stands out because it has much the lowest death rates for colorectum, lung, and pancreas cancers amongst both men and women. DC stands out because it has nearly twice the rate of prostate cancer deaths than the other locations, presumably due to the distinctly older-male biased population of Washington city.

Finally, we can look at some international data. These data are solely for ovarian cancer, involving the 1-year survival rate after diagnosis. The data refer to survival in three different age classes of women (15-49, 50-69, 70-99 years old) for the three different stages at diagnosis. They were analyzed in the same way as above to produce the network.

There is clearly a long way to go in the diagnosis and treatment of cancers.

[Declaration of interest: I have had skin cancer for nearly 30 years, which is a product of growing up in Australia, the country with the highest rate of skin cancer in the world; and recently three female members of my family have been diagnosed with cancer of their reproductive organs. So, I'm thinking about it even if you haven't been.]