Back into the swing of things after a long break from modeling, here's my converted Renault "Adventuring" Van. It started as a Matchbox "Models of Yesteryear" diecast toy that I stripped down, primed, painted, and added stowage to use in Pulp, Back of Beyond, and World War 2 gaming, as both a vehicle and objective. In the past, I've used a lot of Lledo diecast which, while passable, aren't as nice and lack realistic tires.
I disassembled and then primed this model in Krylon Red Oxide, then used hairspray to create the chipping effect. The chassis is straight Tamiya Black and the body itself is Tamiya Light Blue. When chipped, the light tone blue and reddish-orange create a nice contrast (you see it a lot in movie posters lately). The large ying-yang symbol was from a 1/32 WW1 biplane kit and the rest of the decals are from various 1/56 Rubicon vehicle kits. The stowage itself is a mix of 1/48 Tamiya fuel canisters & stowage, beads, and basswood. I then reassembled and heavily weathered the model with oils and pigments. As the tires are soft plastic, I just gave them a heavy wash of watered-down Secret Weapon Basic Dirt to simulate road dust. 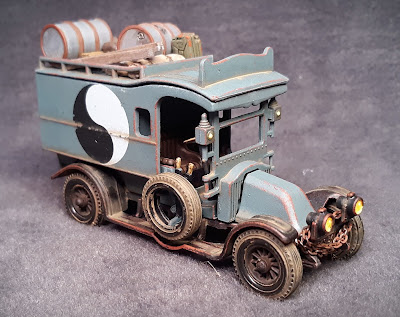 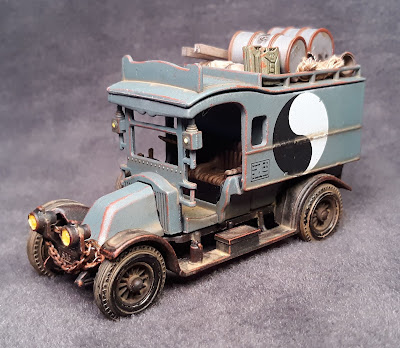 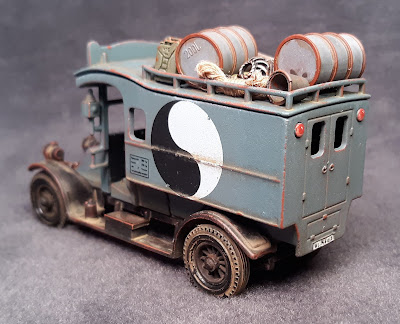 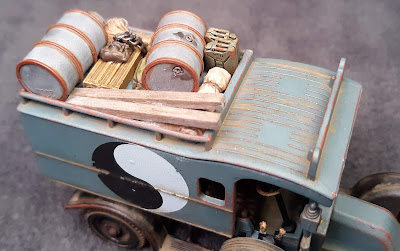